Current is part of the new generation of teen prepaid cards. It provides automation and oversight for parents and a modern-day financial training tool for teens. There’s no doubt about it. Current has spent serious effort in designing its prepaid card and mobile app to appeal to teens. It just looks cool.

But there’s substance behind the marketing. Current provides teens with a measure of financial independence along with money-management tools. And it gives parents a view into their teen’s spending and the tools to teach their teens good habits.

The Current prepaid card is a Visa-branded card. So, teens can use it to make online or in-store purchases just like a Visa credit card. 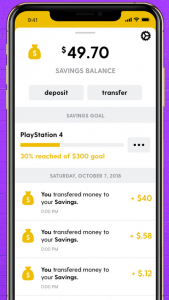 The Current mobile app gives teens visibility into where their money goes with its detailed transaction history. Teens can stash money towards a savings target, like that next gaming console.

The Current prepaid card even puts giving into the mix, allowing teens to donate directly to millions of charities.

Current is one of the few prepaid solutions that provide teens with the ability to fund their card using direct deposit. A crucial feature for teens with part-time jobs.

Current doesn’t forget that parents are the ones ultimately making decisions about their teen’s money.

The Current app equips parents with visibility into where their kids are spending. The Current card enables parents to automate allowance payments–a great convenience feature. Parents can also choose to tie those payments to chores. Since Current is not a credit card, it avoids teens going down the path of equating spending with debt. Parents can even suspend their teen’s card.

Parents also determine how their teen’s account is funded and when.

Parents can fund their teen’s card through direct transfers from their bank account or by instantly transferring money from the parent’s primary balance. Transfers from a bank account are ACH transfers, so they take a day or two. But transfers from the parent’s Current balance are instant. So, parents can transfer a couple hundred dollars to their primary balance that they can dole out over time. But that money will also be available to make an immediate transfer to cover the occasional unexpected school expense. (Those never happen–right?)

The Current card charges a monthly fee of $3 for the first teen card, just $1 for additional teens, and little else. The card charges no transaction fees or activation fees. There is no free ATM network with the Current card, however. So, while Current does not charge any fee for ATM transactions, the ATM owner will–typically $1 – $3. Current’s monthly fee is billed annually, but it offers a free 30-day trial to check it out.

Current provides a teen financial solution that appeals to both parents and their teens. Parents will like Current’s convenience and oversight features. Teens will like the level of independence that comes with controlling their own spending. And the look of Current’s card and app don’t hurt either.

With its parental controls and teen money-management features, the Current card can be a solid financial teaching tool for teens. With its latest feature-adds for older teens, such as direct deposit, Current provides a legitimate money solution even for those graduating to early adulthood.

Current’s features combined with reasonable fees put it on our list of Best Teen Prepaid Cards.